Welcome to the May 2022 issue of the EVN/JIVE Newsletter.

If anything is really important at this time are the recent dramatic events unfolding in Ukraine, which are a severe challenge to the founding spirit of the EVN, based on mutual cooperation and collaboration towards the common goal of improving knowledge and progress in science. The EVN Consortium Board of Directors have issued a statement that, in accordance with the decisions and policies set by the European Commission and many European governments, freezes the cooperation with Russian institutions until further notice. The EVN Directors are aware of the impact of this decision for the whole community of astronomers and radio astronomers worldwide, and very much hope that peace will soon be re-established, and that full operations can be resumed as soon as possible.

This happens in a moment when the restrictions for COVID-19 are being generally lifted, and many activities are returning to a “new normality”. Events are starting to be scheduled in person again; we look forward to the next EVN Scientific Symposium and Users’ meeting that will take place in Cork (Ireland) on 11-15 July, moreover, EVN and VLBI will be featured at the URSI AT-AP-RASC 2022 meeting in Gran Canaria (Spain) and at the IAU General Assembly in Busan (Republic of Korea, with a special session on the Global VLBI Alliance on 8 August).

This issue also reports on new exciting scientific results, as well as updates on international projects and collaborations.

We wish to draw your attention to the results highlighted on this newsletter regarding Tidal Disruption Events, masers and Fast Radio Bursts where the contribution of the EVN has been invaluable. Furthermore, don't miss out on the article discussing the celebrations of the International Day of Women and Girls in Science at Yebes Observatory (Spain). All this and much more are included in this issue.

We thank our community for the continuous dedication which, at all times, ensures advances, observations and excellent science delivery.

Observing proposals are invited for the European VLBI Network (EVN). Deadline: 1 June 2022, 16:00:00 UTC. The EVN facility is open to all astronomers. Astronomers with limited or no VLBI experience are particularly encouraged to apply for observing time. Student proposals are judged favorably. Support with proposal preparation, scheduling, correlation, data reduction and analysis can be requested from the Joint Institute for VLBI ERIC (JIVE). Check details of the call for proposals here.

On 11 May 2022, JIVE organises the first online EVN Users' Training Event with the aim to support first-time users of the network. EVN Support Scientists will guide participants through the different steps to allow them to prepare and submit an observing proposal as well as the scheduling of observations. Participation on the webinar is free for everyone but registration is mandatory. Find more information here.

JIVE/EVN has a pilot programme to provide extended support to teams new to the EVN, with little or no direct VLBI experience. This includes the scheduling of the VLBI run and the VLBI-specific parts of the data reduction (including a-priori amplitude calibration and fringe-fitting). Imaging, and the interpretation of the data is the responsibility of the team. We aim to support some standard VLBI projects, evaluated by the EVN Program Committee with the highest grades. See the call for proposals for more information. For further questions please contact the Chair of the EVN PC, Zsolt Paragi (evnpc@jive.eu). 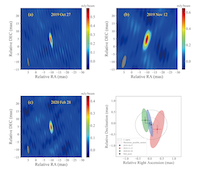 A tidal disruption event (TDE) involves the cataclysmic shredding of a star that approaches the vicinity (at or within the tidal radius) of a galactic supermassive blackhole (SMBH of a million - 100 million times the solar mass, e.g. Rees 1988, Evans & Kochanek 1989). The accreting stellar debris powers a predominantly optical — X-ray flare (thermal blackbody emission) during the early phase (timescale of days, e.g. Saxton et al. 2020). An outflow (relativistic/collimated or non-relativistic/wider angled) can be subsequently produced and accelerated. Synchrotron radio emission is produced by electrons accelerated by an expanding shock (over timescales of months to years, e.g. Alexander et al. 2020). The shock can originate 1) from the interaction between the outflow and the surrounding circum-nuclear medium, and 2) can be intrinsic to the outflow (e.g. injection events, magnetic re-connections in the relativistic jets of active galactic nuclei AGN). Monitoring the radio emission can address its origin, outflow nature... Read More 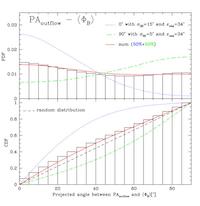 One of the still open questions of modern astrophysics is the formation process of high-mass stars, which have masses greater than 10 solar masses. The observational and theoretical efforts made in the last decades have shown that a common and essential component in the formation of high-mass stars is the presence of molecular outflows during the protostellar phase, similarly to what is observed during the formation of low-mass stars. Theoretically, it has been convincingly demonstrated that the magnetic field plays an important role in launching molecular outflows in massive young stellar objects. Here, for instance, the presence of a magnetic field helps the formation of early outflows that can reduce the radiation pressure through cavities; this partially solves the well-known radiation problem of high-mass star formation allowing the protostar mass to grow further. In addition, the intensity of the magnetic field may influence the collimation of the outflows. Although there is a large consensus on the theoretical importance of magnetic fields... Read More

Fast radio bursts (FRBs) are bright millisecond-duration transients of an extragalactic origin. A great number of theories has been developed to explain this phenomenon in the past decade, many of those invoking neutron stars. Some FRBs are repeating, making it possible to organise detailed follow-up observations that include interferometers, so that to probe the emission regions with extreme resolution and sensitivity. FRB 121102 is the first repeater discovered, and its properties make the source unique among FRBs. It lies within a star-forming region of a dwarf galaxy at a redshift of 0.19. The high rotation measure (RM) exceeding 105 rad/m2 indicates dense highly magnetised plasma around the emitter. This plasma is likely related to... Read More

Statement of the EVN Directors on the events unfolding in Ukraine

The European VLBI Network (EVN) is a consortium of individual radio observatories which commit a fraction of their time for joint observations of scientific projects. These projects are selected on the basis of scientific merit alone and the EVN has always been and remains open to scientists from all countries. Starting from a network including five observatories in central Europe, it now extends east, west and south to embrace China, Puerto Rico and South Africa. Since its foundation, in 1985, the EVN has been based on mutual cooperation and collaboration towards the common goal of improving knowledge and progress in science. This goal has always been successfully achieved, and the inclusion of more and more observatories in new countries has been possible thanks to the generous dedication... Read More 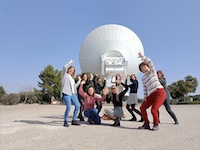 The International Day of Women and Girls in Science was celebrated on February 11th, and Yebes Observatory (Spain) wanted to commemorate this event in a very special way. Some of the talented women working in the observatory shared their views and feelings about working in science, in an extensive interview published in the provincial newspaper El Decano de Guadalajara. According to Laura Barbas, a telecommunications engineer who is the head of the Control Systems Service at the Yebes Observatory, women represent 24% of the staff of this observatory, one of the most important of the Spanish National Geographic Institute, under the Ministry of Transport, Mobility and Urban Agenda. Laura emphasises the importance of promoting family reconciliation policies... Read More 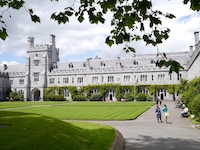 The 15th EVN Symposium, “Providing the Sharpest View of the Universe,” was originally scheduled to take place at University College Cork, Ireland, in July 2020, but had to be cancelled due to the COVID-19 pandemic. It was originally hoped to reschedule it for July 2021, but even with vaccines becoming available, this wasn’t possible, and an “EVN Mini-Symposium” was held online instead. This online symposium was successful and it was great to be able to include participants from locations all around the globe. However, many of us still longed to be able to gather in person. Now the 15th EVN Symposium is again scheduled to take place in person in Cork, Ireland during 11-15 July 2022. However, we don’t want to lose the participation of colleagues whose circumstances would prevent them from coming in person... Read More 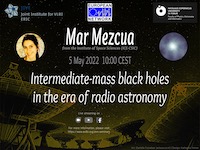 The European VLBI Network (EVN) is pleased to announce a new seminar within the 2nd series of online seminars “The Sharpest view of the Radio Universe: VLBI - Connecting Astronomers Worldwide”.This will be the last seminar before the EVN Symposium, which will take place on 11-15 July July 2022 in Cork, Ireland.

The seminar will take place on Thursday 5 May at 10:00 CEST.  Our speaker, Mar Mezcua, from the Institute of Space Sciences (ICE-CSIC), will talk about "Intermediate-mass black holes in the era of radio astronomy"

Full information about the webinars, which will be run using Zoom & YouTube, can be found at evlbi.org/evn-seminars.

On 14 February 2022, we fell in love with the prospects and planned capabilities of VLBI observations with the SKA arrays as the symposium VLBI in the SKA Era kicked off. To accommodate both a large number of participants from all over the world and ongoing COVID restrictions, the meeting was held in an online format. The event platform Whova provided a wide range of opportunities for successful presentations, discussions, and interactions during the conference. The topic of the event ignited a great interest in the scientific community and attracted more than 400 participants from around 40 countries. The event could be tracked on social media using the hashtag #SKAVLBI2022. The conference agenda was split into...Read More

This September sees the return of the European Radio Interferometry School (ERIS), which is the flagship training activity for new users within the RadioNet community. ERIS aims to provide a foundation course in the theory of radio interferometry at m to mm-wavelengths, while also giving advanced lectures on the techniques associated with our RadioNet facilities (ALMA, e-MERLIN, EVN, LOFAR and NOEMA). A key component of the school is the hands-on practical tutorials that give the students direct experience in the reduction and the analysis of interferometric data. The school will be organised by JIVE and ASTRON in Dwingeloo (the Netherlands), and is held from 19 to 23 September 2022. ERIS 2022 is the 9th edition of the school...Read More

OPTICON RadioNet Pilot (ORP) is one of the European Commission's transnational access 'pilot' programs under EC H2020, launched in March 2021. This four-year project brings together 37 institutions to support and develop seamless access to radio and optical facilities. A new Scientific Coordinator, Stephane Basa was appointed by the Board on 28 March 2022, follwoing CNRS's proposal, responding to the nomination of Jean-Gabriel Cuby as Executive Director of the CFHT. Through various processes, ORP brings together radio and optical astronomers to create a stronger community... Read More

e-MERLIN requests proposals from the international astronomical community for observations to be made during Cycle-14. Deadline for proposal submission: 18 May 2022 13:59:59 UT.

e-MERLIN is open to all users with projects allocated solely on the basis of scientific merit and technical feasibility. Additionally, e-MERLIN is one of the participating infrastructures in the Horizon 2020 OPTICON-RadioNet PILOT project. This programme will provide facility access and financial support for users from eligible projects in Cycle-14.