The sharpest view of the radio Universe

The EVN presents a series of virtual seminars focused on how very long baseline interferometry (VLBI) observations can significantly contribute to different astronomical fields. These seminars are oriented to the broad astronomical community and provide an engaging introduction to cutting-edge research from different groups across the world.

A series of 7 talks, covering 7 different science topics with 7 different speakers, are allocated during 2020-2021. Discover with us these passionate fields.

The seminars will have a duration of 40 minutes (plus around 20 minutes of questions and discussion), and can be joined by Zoom or watched in streaming in YouTube. Note that the Zoom capacity is 100 participants. Once the limit is reached we will refer to the YouTube streaming. The videos will be recorded and published at the JIVE/EVN YouTube channel and could be watched at any time. 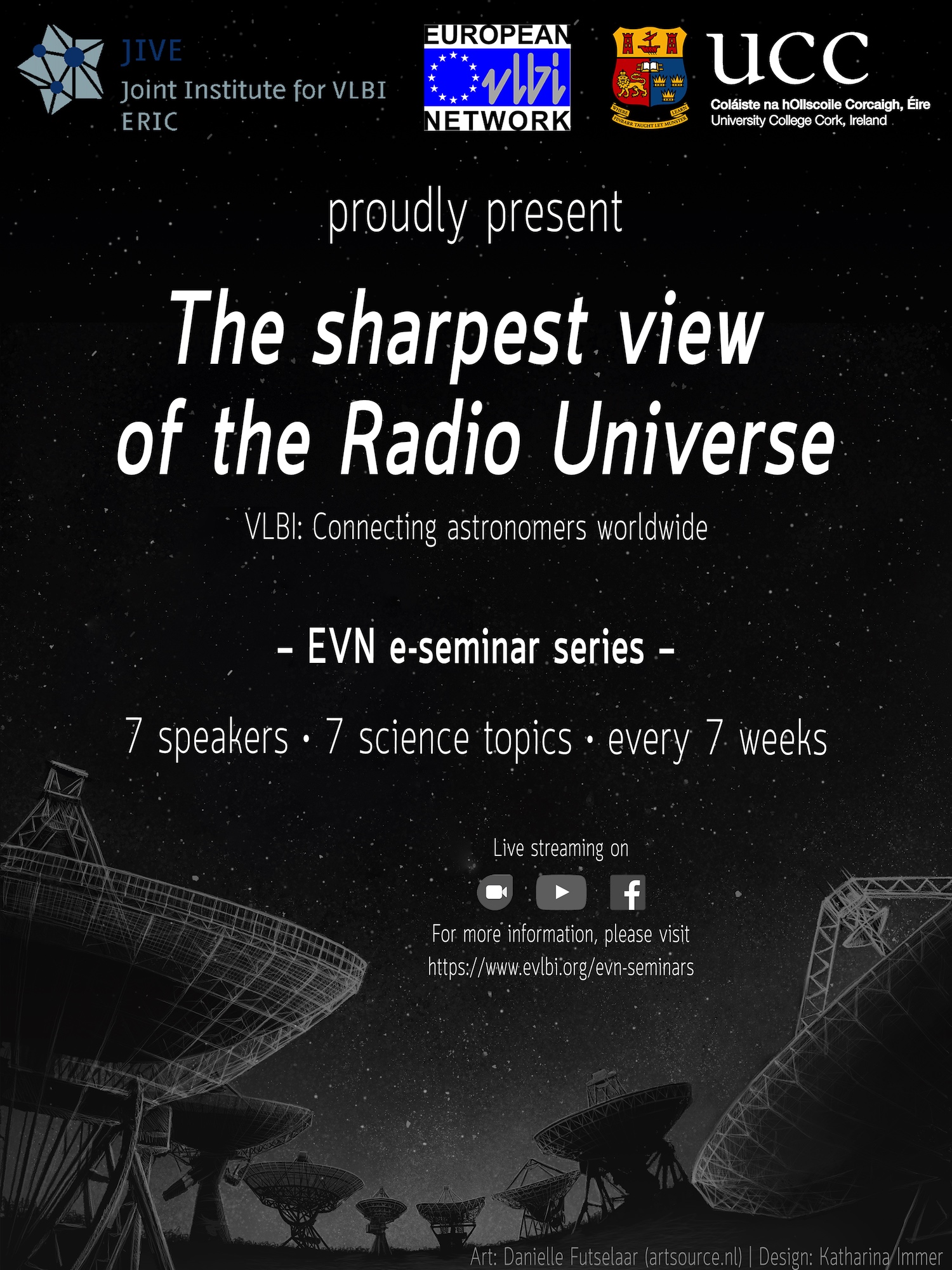 Future speakers will include

More specific information about the dates, times, and titles of talks will be posted as it becomes available.

Past Seminars (rewatch them!)

As intermediate-mass stars head towards their final fate, they pass through the red-giant stage where they experience an increase of mass loss. This induces the creation of a circumstellar envelope of dust and gas. By the very end of this evolutionary stage, the amount of dust in the circumstellar envelope of a good fraction of these evolved stars is such that it blocks optical radiation, turning them into so-called OH/IR stars. These precursors of planetary nebulae are commonly observed throughout the Galaxy and are also observed in the Magellanic Clouds. Since optically thick, measurements of their distances using optical parallaxes as e.g. delivered by GAIA, is not possible. This issue can be circumvented thanks to maser emission. As their name gives it away, the physical conditions turn out to be ideal for a strong (1612-MHz) OH maser emission to be produced in the outer layers of the radially-expanding spherical circumstellar envelope of OH/IR stars. I will present how, combining single-dish monitoring and interferometric mapping of this OH maser emission, the "phase-lag method" allows us to measure their distance. 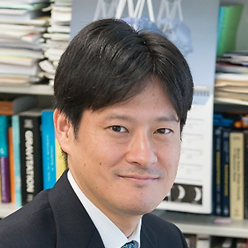 I will present the most recent results of high-resolution maser astrometry with Very Long Baseline Interferometry (VLBI). Maser astrometric surveys have been conducted with the Japanese VERA array and the Bar and Spiral Structure Legacy (BeSSeL) project, aimed at exploring the dynamic structure of the Milky Way. I will present recent results from these surveys, mainly covering topics on the determination of fundamental parameters, rotation curve measurement, tracing spiral structures, comparisons/calibrations of GAIA astrometry, and so on. I will also cover some topics related to individual maser sources (star forming regions and AGB stars) revealed by VLBI astrometry in combination with other arrays such as the Atacama Large Millimeter Array (ALMA). Finally, I will briefly discuss the future prospects of VLBI astrometry for forthcoming global VLBI in the SKA era. 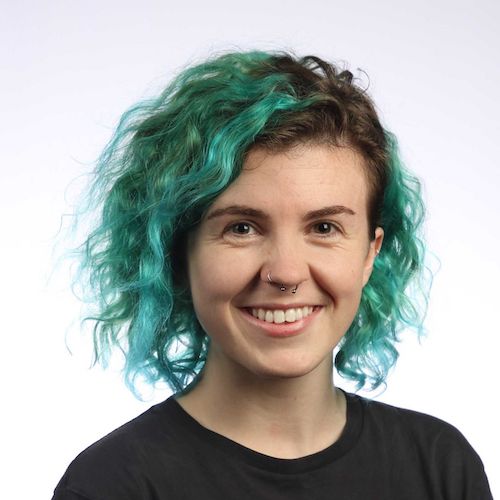 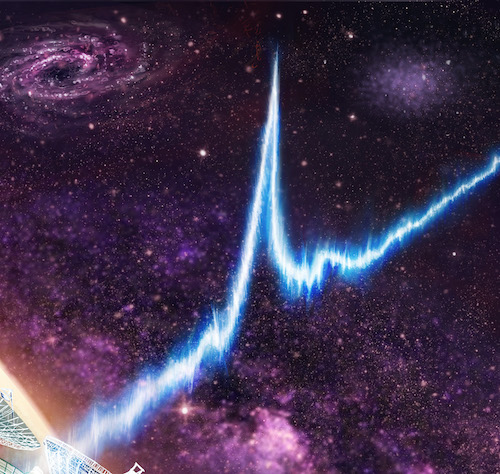 Fast radio bursts (FRBs) are bright pulses of coherent radio emission with durations of only a few milliseconds, and unknown extragalactic origin. Some FRBs have been observed to repeat, whereas others appear as one-off events. Currently it still remains unclear whether all FRB sources have the ability to repeat, or if there are multiple populations with different physical mechanisms. Recently, the Galactic magnetar SGR 1935+2154 emitted a very bright radio burst (orders of magnitude brighter than typical Galactic radio bursts from pulsars/magnetars) unveiling a bridge between Galactic sources of radio bursts and FRBs. With the European VLBI Network (EVN) we can precisely localise FRBs to milli-arcsecond precision, identifying not only the host galaxy, but the region within the host that the bursts are originating from. This will help in understanding the FRB progenitor(s) and how FRBs link to Galactic sources. In addition to the real-time correlation observing mode (e-EVN), baseband data can be buffered to study fine time and frequency structures of the bursts, as well as their polarisation properties. In this talk I will discuss our approach to localising repeating FRBs using the EVN, present the localisation of a second repeater, FRB 180619.J0158+65, and present recent results on SGR 1935+2154. 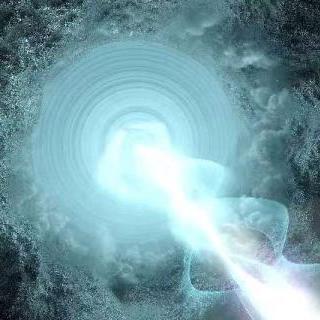 VLBI as a key to the origin of high-energy neutrinos

Observational information on high-energy astrophysical neutrinos is being continuously collected by the IceCube observatory. However, the sources of the neutrinos are still unknown. We studied a large complete VLBI-selected sample of extragalactic radio sources and found that AGN positionally associated with IceCube events have typically stronger parsec-scale cores. Moreover, we see an increase of radio emission at frequencies above 10 GHz around neutrino arrival times. We conclude that AGNs with bright Doppler-boosted jets observed at small viewing angles constitute an important population of neutrino sources. High-energy neutrinos are produced in their central parsec-scale regions, probably in proton-photon interactions. 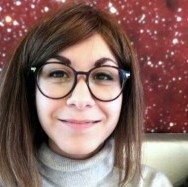 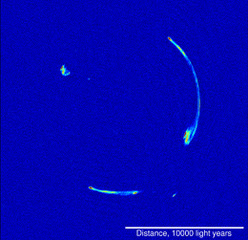 Using Strong Gravitational Lensing to Zoom in on High-Redshift Galaxies

The centres of galaxies are powerful laboratories to test models of galaxy formation, as well as the interplay between supermassive black holes and their host galaxies. While these sub-galactic scales can be directly investigated in the local Universe, it is observationally extremely difficult to access them at high redshift. In this talk, we will exploit the combination of strong gravitational lensing and multi-wavelength high angular resolution observations to directly study the parsec scale emission in active galaxies at z > 1. The magnifying effect of strong lensing and the milliarcsecond angular resolution of HST, Keck AO and VLBI observations allow us to spatially resolve the central parts of distant lensed galaxies, especially if they are located in the regions at highest magnification. Therefore, it becomes possible to unveil dual and offset AGN candidates, but also faint extended jets embedded in massive molecular gas reservoirs at cosmological distances. Nevertheless, this kind of study is currently limited by the small number of radio-loud lensed sources. We will conclude by discussing the current efforts to search for more lensing systems in wide-field VLBI surveys.